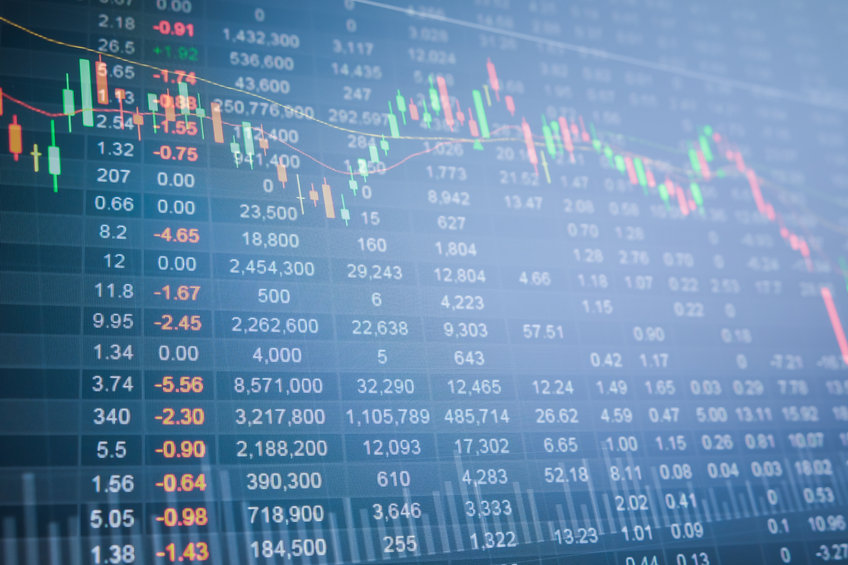 Wow, what a crazy year. If there was ever going to be a year to prove, once and for all, that the prognosticators and so-called financial gurus cannot consistently predict near-term future market performance, 2021 brought that message home in unmistakable terms.

Who could have foreseen at the beginning of last year that with new vaccines coming onstream, we would be ending 2021 with a sizable percentage of the population still unvaccinated, two major waves of new variants sweeping the world, and infection rates that dwarf those from last January when virtually nobody was vaccinated?

On top of that, we’ve seen supply chain delays cause shortages of products throughout the economy which has been wreaking havoc on sales of everything from home appliances to automobiles, and, oh, by the way, inflation also rose to the highest level in decades with the Fed indicating that tightening was coming in 2022.

Now, you might think those conditions would create a perfect storm for stock prices, but you would be dead wrong. Despite all the challenges that 2021 could dish out, stocks powered to repeated new highs with the S&P 500 Index gaining 26.9% for the year and setting 69 records in the process.

Other asset classes also did well. The tech-heavy NASDAQ Composite was up 21.4% and the Russell 2000 Small-Cap Index posted a 14.8% return. In foreign markets, the EAFE Index gained 8.3% and Emerging Markets stocks, dragged down by China’s political and economic problems, lost 4.6%. Surprisingly, given COVID’s depressing impact on office space occupancy rates, the Wilshire US REIT Index of commercial real estate actually gained 46.2% in 2021, once again demonstrating the utter folly of trying to time any markets.

Bonds lost a slight amount, as yields increased. The 10-year Treasury bond yield increased from 0.95% a year ago to 1.5% at year end, and the 30-year Treasury closed the year yielding 1.9%.

We’re going to help you make sense of all this mishmash of conflicting signals and cross currents, but the overriding sense we hope you will take away from 2021 is an appreciation and increased sensed of confidence in the extraordinary resiliency of the global economy and financial markets in the face of unprecedented challenges. We have heard over the years many clients who voiced concerns about the negative impact this president or that Congress would have on the markets.  Particularly after the events of the last two years, we hope even the most pessimistic among us are beginning to see that no matter what the winds of fortune throw at us, we’re going to get through it and we’re going to be fine.

One major factor underpinning the fabulous stock market returns we’ve experienced is the fact that today, nearly two years after the pandemic began, the nation’s gross domestic product (GDP)has completely rebounded, while most companies’ sales are significantly higher than they were before it started. Revenues among S&P 500 companies are 15% higher than two years ago, and their net income is an astonishing 55% higher. No two ways about it, despite all the disruptive forces they’ve faced including supply chain woes, labor shortages, employees working from home most of the past two years, and sudden upheavals in how Americans spend their money, corporate managers demonstrated amazing perseverance and resourcefulness in guiding their firms to record sales and profits. 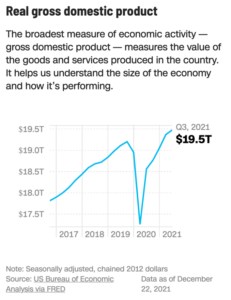 Much credit also should go to the federal government for quickly and repeatedly injecting stimulus into the economy in the form of cash, unemployment benefits, forgivable loans to companies, mortgage and student loan forbearance, a moratorium on evictions, and direct aid to states. The Fed also slashed short-term interest rates to zero and instituted a new program of buying corporate debt to prevent another credit freeze like we saw during the 2007-09 housing crisis. While there were certainly excesses in many of these programs, it is indisputable that taken together they rescued the U.S. and global economy from what would have almost certainly been a sharper, steeper and more prolonged downturn. With its COVID response, the federal government has added powerful new tools to its repertoire, and that bodes well for our economic stability through any future economic crisis that will undoubtedly occur.

The one-two punch of government support for the economy and companies’ ability to quickly figure out how to navigate the pandemic has almost completely reversed the unemployment spike we saw when much of the economy shut down in early 2020. U.S. payrolls remain lightly below the 2019 high, but anecdotal information has shown that much of the remaining shortfall is due to a change in the behavior by workers, many of whom changed jobs or had changes of heart about how and where they want to spend their productive lives. 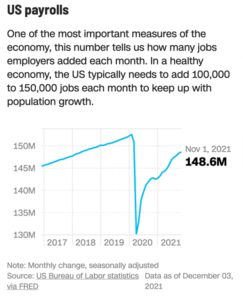 Much has been made about the impact that shortages in the supply chain have had on the spiking inflation rate that began last year. However, a recent article in the Wall Street Journal pointed out that steadily extreme weather patterns may be a larger culprit. For example, do you remember that deep freeze in Texas last February? It drove a spike in gas prices around the country, and shut down chemical plants on the Gulf Coast, setting the stage for a whole slew of higher prices for basic products like cement, steel, resin, plastics, and paint.

Droughts ruined crops and dried up rivers used to transport products to Atlantic ports in South America, driving corn and soybean prices higher than in years. In North Dakota, more than 1.2 million acres of wheat were lost because of drought, and Canadian oat prices hit record highs for the same reason. Natural gas prices spiked after hydroelectric power production was halted along drought-stricken California rivers, and wildfires in the Pacific Northwest shut down timber harvesting. Floods in British Columbia shut down sawmills and drove lumber prices even higher and flooding in China and Canada hobbled the tin and copper markets, driving prices to new highs. This pattern occurred non-stop all year long, across the globe.  If these weather patterns persist, we may very likely see more price increases in the future, notwithstanding a return to normal patterns in the shipping industry and the supply chain. 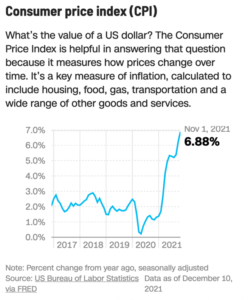 The Omicron Variant has forced several leading econometric forecasters to reduce their GDP estimates for this year, from more than 4% to the mid 2% range. However, those reductions already seem premature and excessive, given that Omicron has already begin subsiding in areas of the world that got hit the earliest. If the virus can also peak early in the U.S., we may yet see outsized economic growth as some of the hardest hit industries like travel and leisure have the opportunity to recover in the face of pent-up demand to travel—anywhere!

That said, it is wise for all of us to be realistic in our expectations about equity prices going forward. After two years of 20+ percent stock price increases, it is reasonable to infer that unless corporate profits continue to travel on the extremely high growth trajectory they have been on over the last 18 months, we could see a softening in stock price appreciation this year. Likewise, the Fed’s desire to increase short term interest rates might negatively affect bond interest rates, but higher returns on short-term cash investments like Treasury bills and bank accounts should help savers. It’s clearly tough to make any predictions at all when it comes to the economy, but the odds do favor lower returns overall this year. Time will tell.

As always, give us a call if you’d like to discuss your portfolio going forward. Happy New Year!

Alamo, CA neighbors and beyond it’s time to discover your Place of Possibility™ today. Our goal is to address every aspect of your life, defining a clear and actionable plan that meets your lifestyle needs. So, whether we’re holding your hand or taking more of the reins for you while you do life, you can rest assured that your money is growing and working for you while you enjoy it. Who knew?! Sound like something you’re struggling with or need more of? Get in touch to schedule a free 30-minute consultation, and let’s get started! You can contact us in a few different ways. One, by calling at 925.736.6410, you can send us an email at Info@APlaceOfPossibility.com or jump right into our calendar and select a date and time that works for you. We’re excited to meet with you!

Going from “We to Me” Panel Discussion Featuring Angela Wright

Welcome to the second half of 2022. It’s been a very ”fascinating” ride, hasn’t it? Stocks fell for another straight quarter, with the MSCI All Country World IMI Index dropping nearly 16% and major indices entering bear market territory...

Good Afternoon,  We want to update you on the recent market action and provide you with a bit of perspective to help you think about what is going on. First and foremost—all is not lost! Despite the last week’s...