By any measure, 2019 was a remarkable year for investors—and who could have guessed? Stocks went on sale in the fourth quarter of 2018, dropping by 20%, and many were predicting the decline would continue through 2019. However investors who took advantage of the lower prices or stayed the course saw well-above-average gains almost across the board.

There were plenty of events investors could have pointed to as reasons not to invest in stocks last year. After finishing 2018 with a thud, the year started off with the government shutdown (does anyone remember that?), ongoing trade uncertainty with China, the yield curve inversion over summer, and ended with the impeachment of the President of the United States.

Had we known, in advance, that all of those events would occur in 2019, could anyone have predicted stocks would have had the blowout year they had? It’s doubtful. But that’s exactly what happened.

A breakdown shows that just about every investment asset increased strongly in 2019. U.S. large-cap stocks, measured by the S&P 500, led the way gaining 8.5% in the fourth quarter, providing a 29% return for the year. U.S. small company stocks had a strong fourth quarter, surging 9.3% to end the year with a 26% return.

Even the foreign markets were generous to investors this year. Stocks of companies in developed international economies gained 8.5% in the final quarter and ended the year up 18.4%. Emerging market stocks of less developed countries were up 11% in the fourth quarter, giving these 15.4% gain for the year. 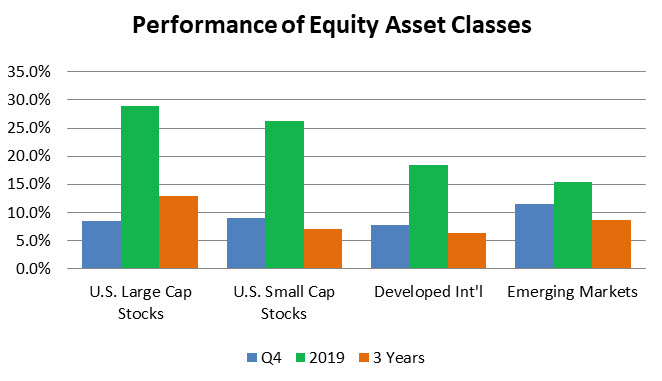 Bonds also did well in 2019. After raising interest rates four times in 2018, the Federal Reserve cut them three times in 2019, which added stimulus to the economy and pushed up bond prices. Real estate, as measured by the Wilshire U.S. REIT index, benefited from falling interest rates, finishing the year with a 26% gain.

The climb to new all-time highs for stocks wasn’t a smooth ride; it never is. Investors panicked in May, set off by one of President Trumps’ tweets on trade talks with China. And again in August after a very slight inversion of the yield curve, which many believed was signaling that a recession was on the near horizon (it wasn’t). However, investors slowly realized that widespread fears of major disaster—trade wars tipping the economy into recession, a significant year-over-year decline in earnings, and a constitutional crisis regarding impeachment—were overblown. Stocks rallied through year-end as economic indicators actually improved.

Longer-term, it is certain that we will experience a recession at some point, but no person alive can predict the hour or the day. Most economists are reluctant to predict an economic downturn when unemployment is at record lows, and the economy continues to expand, inflation remains low, and corporate earnings are continuing to grow, albeit a bit slower. This is why, in spite of all of the drama discussed above, stocks ultimately rallied last year. This is the kind of news investors should be paying attention to.

This is not meant to be a prediction of what is to come this year. There are plenty of obstacles that investors may face in 2020, including the U.S. elections, the Federal Reserve’s next interest rate move, and increasing tensions in the Middle East, just to name of few of the known risks. Then, of course, there are those unknown risks that aren’t currently on anyone’s radar.

Your investment outcomes depend far less on reacting to current events or trying to predict future unknown outcomes, and far more on embracing more durable insights. These are the ones that have been stress-tested across decades of market moves, and have rarely changed from one year – or even one decade – to the next.

In that context, here are three simple strategies we recommend for your 2020 investments:

Allocate some of your investments to stocks accordingly, and don’t waver in your commitment during the years that don’t deliver strong returns.

To combat your personal doubts in the face of financial uncertainty, remain diversified across and within stock and bond asset classes, according to your financial goals and risk tolerance.

Lean on us as your advisor to help you translate your ideal goals into plans that make sense for you, and to you, come what may in the markets.

We wish you all good things in 2020. More than that, we look forward to guiding you through whatever the year has in store.

Thank you, most sincerely, for being our clients. It is an honor and a pleasure to serve you.