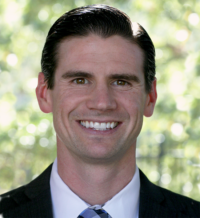 After a rollercoaster second quarter, stocks ended the first half of the year on a positive note. The quarter began with stock prices continuing to recover from the brutal final month of 2018. Through April, U.S. stocks were up 17% on the year. However, that was before concerns over trade, new tariffs, and slowing global economic growth spooked investors in May. The S&P 500 declined nearly 7% in May, erasing all of April’s gains and then some. However, stocks recovered with a significant rebound in June, capping off a strong first half of the year.

Just about every investment asset produced gains in the second quarter. The S&P 500 index led the way, gaining 3.8% over the past three months, up 17% in the first half of 2019. U.S. small company stocks delivered a 2.1% return during the quarter and are now up 16% year to date. International investors are also sitting on gains. Developed international markets were up about 3.2% in the second quarter, and are up 14% so far this year. Emerging market stocks, of less developed countries, eked out a 0.6% gain, but are up 11% for the year.

Stocks weren’t the only investments delivering gains in the first half of the year. Bond markets also did well. Bond prices benefited from the complete reversal in interest rates (interest rates were trending higher towards the end of 2018). The U.S 10-year Treasury started the year at 2.75% and ended June at 2.00%. Bond prices rise when yields fall – therefore bonds rallied 3.1% in the second quarter, up 4.3% through the first half of the year. Real estate investments also benefited from declining interest rates, ending June up nearly 18% for the year. 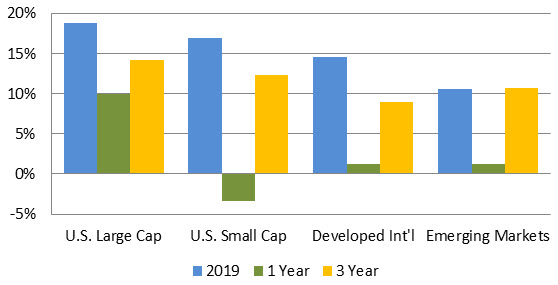 These are fantastic numbers for a full year, let alone 6-months. An excellent recovery from where stock prices were at the end of 2018.

The Federal Reserve (Fed) and their interest rate policy has also been a focal point for investors. After four years of raising interest rates, the Fed is now poised to cut short-term interest rates for the first time since 2015. The widely-expected rate cut is in response to some softer economic numbers here in the U.S. and growing uneasiness about a global slowdown in the face of the ongoing trade disputes. Lower interest rates should be positive for the housing market and other interest rate sensitive areas of the economy. Also, lower rates in the absence of a recession tend to encourage spending and lift most asset classes, including stocks, bonds, and real estate.

Despite concerns over international trade, the U.S. economy continues to grow. News on the economic front was generally positive in the second quarter. First-quarter U.S. GDP was initially reported at a 3.2% growth rate and later revised to 3.1%, still well above the 2.4% expected rate. Economists are expecting 2019 GDP to produce 2-3% growth. The employment picture remains bright at 3.6%, the lowest unemployment in 50 years. While earnings declined in the first quarter and will likely do so again in the second quarter, earnings are expected to resume growth later in the year. A return to growth should help support stock prices.

You might imagine that a strong first half of the year would normally be followed by an easing back or even a drop in value over the second half, but that has not necessarily been the case historically. During years in which the U.S. market rose in the first half of the year, the odds of a positive second half, based on the historical record, are 72%. That certainly doesn’t guarantee anything, but it does suggest that market movements tend to be much harder to predict than one might imagine.

To reinforce how darn difficult it is to predict the future, take a look at this graph from the Wall Street Journal showing 2019 interest rate predictions from a survey of 69 economists. 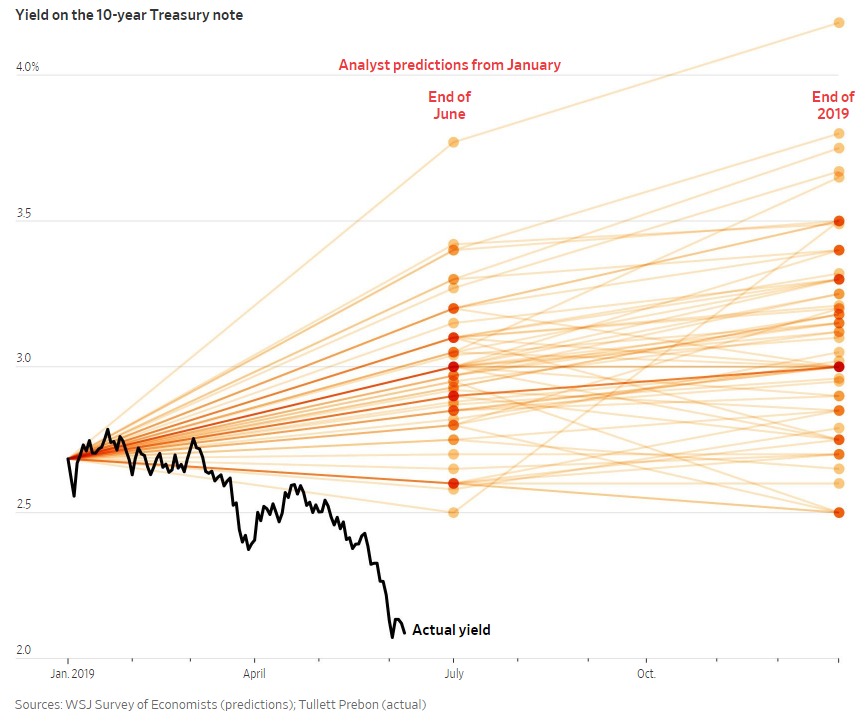 Most investors were surprised at the roaring start in 2019 considering the downturn at the end of 2018. We can expect to be surprised again, either on the upside or the downside, in the second half of this year. The second quarter—with the sharp decline in May, followed by a strong reversal to the upside in June—provided another example of why attempting to time the market is a bad idea. Just like predicting short-term interest rates is darn near impossible (as shown above), trying to predict the short-term direction of the stock market is equally as difficult. The best approach, when faced with uncertainty, is to remain diversified. We’ll continue managing your portfolios using the strategy we know works: ignore the news noise, focus on what we can control, and stick to the long-term plan through all market cycles.

If we can answer any questions about your quarterly performance reports or meet with you to go over your general plans and goals, please let us know.

Every client that walks through our door is family. Your goals are our goals, and that’s why we work hard to provide a true Place of Possibility™, so we can help you meet and exceed them. Our wealth management services work to navigate life transitions and take advantage of unique planning opportunities that leave you feeling calm and confident. We offer solutions based on you and your needs, not strategies that make us a quick buck. No matter how life unfolds, we’ll help you connect the dots and always have your back. The door to our Alamo, CA-based headquarters is always open. How can we assist you? Call us at 925.736.6410, send an email to Info@APlaceOfPossibility.com or jump right into our calendar and select a date and time that works for you and let’s talk.