Should I Invest More in Tesla?

Last year was a banner year for the stock of Tesla – the stock price increased a whopping 695%! Those kinds of dazzling returns, plus those of other technology stocks like Apple (+88%), Netflix (+67%,) and Amazon (+76%) can make any investor swoon. But should you buy them?

First, if you have a portfolio at DMG, you do already own those stocks. You may be surprised to know that Apple, Microsoft, Amazon, Facebook, Tesla, Alphabet (Google), and Berkshire Hathaway currently make up 25% of the S&P 500 Index. Their impact on your portfolio is already large, but should you own more so that you can take advantage of these incredible returns?

Dimensional Funds reports that over the last 92 years, whenever a company became one of the top ten stocks in the market by size, they experienced dramatically outsized excess returns (in other words, returns higher than the overall market) during the 3, 5, and 10 years leading up to when they made the top ten. However, what happened afterward is very instructive. On average, the newly minted behemoths ended up lagging the overall market by more than 1% annually, over the next five- and ten-year periods.

Looking at Tesla individually is also instructive. The stock earns 50 cents a share so at their recent price of $811 per share, a purchaser today is paying 1,622 times earnings to buy the stock. Apple is selling at $129 a share and earns $3.27 a share. That means a purchaser of Apple would pay 39 times earnings to buy the stock. In contrast, to buy a share of JP Morgan, you would pay 18 times earnings. For Tesla’s stock to be as cheap as Apple’s stock, Tesla’s profits would need to grow more than 4,000%. Is Tesla going to grow to the sky? Anything is possible, but history shows the odds of it outperforming over the next decade, after it has already gotten into the Top 10,  are very low (see chart below). The moral of the story is (surprise!), stay diversified and don’t chase returns. 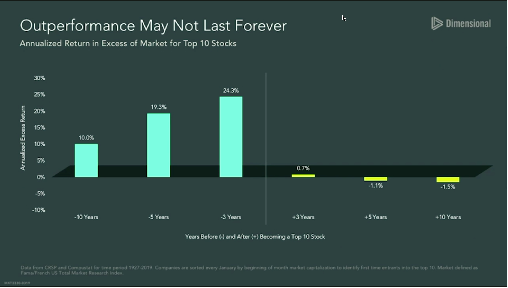