The Election & The Markets 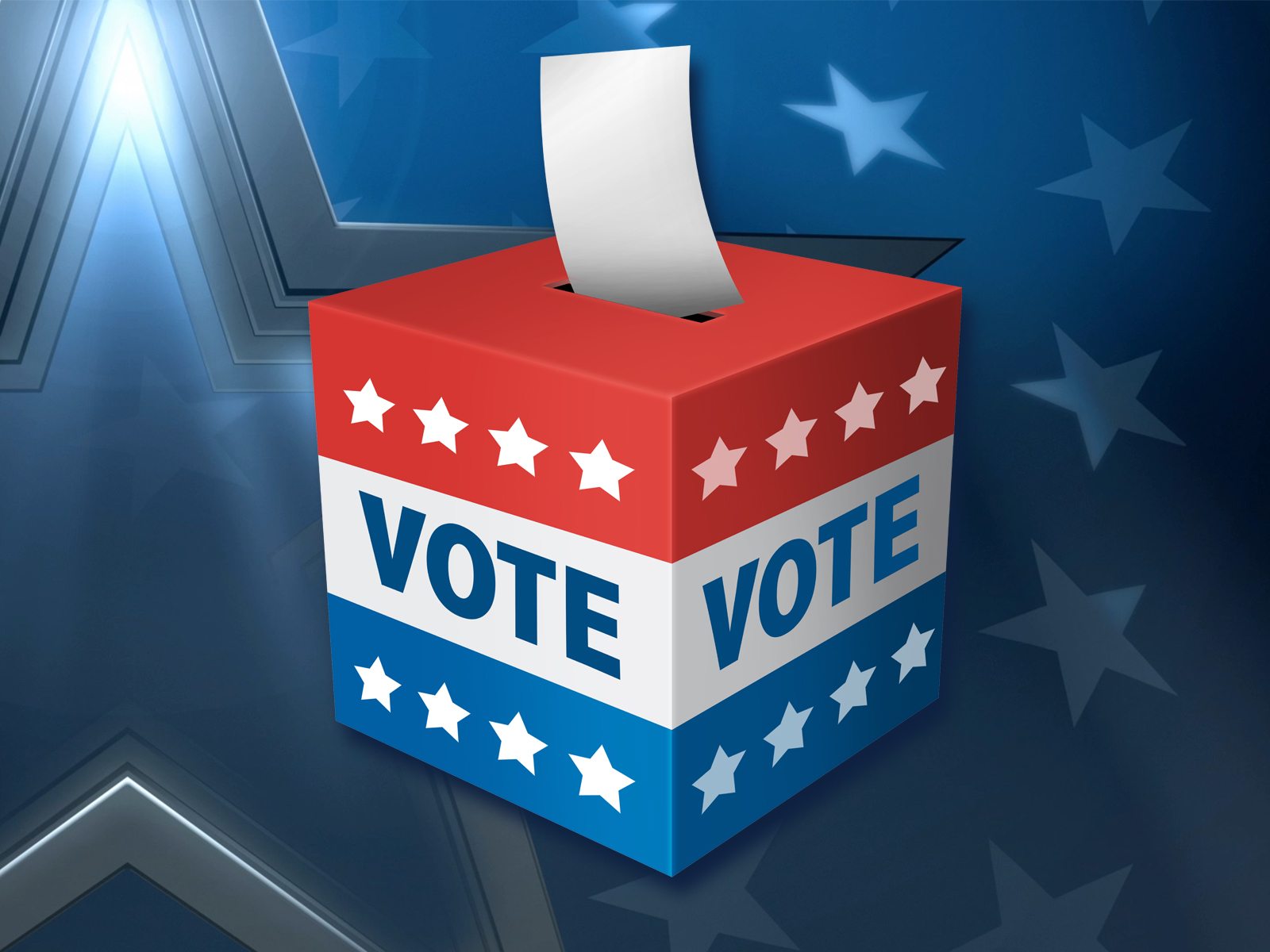 No matter which side of the aisle you sit on politically, you are probably concerned about the potential impact the upcoming presidential and congressional elections will have on the financial markets.

Over the decades of my career, I’ve seen more than a few clients “vote with their feet” by getting out of stocks in anticipation of the election going in a direction they don’t like. For example, we had a handful of clients wanting to sell their stocks when Donald Trump was elected in 2016, only to get back in later after the markets had risen substantially.

The most memorable of these situations for me was a long-time client who got out of the markets when George W. Bush was elected, because the client (Hal) was convinced Bush was going to “kill our economy.” Unfortunately, Hal got out when the Dow was at 16,000, so even though we had two big market declines in the interim, stocks are still up 121%, handily beating most other investments, especially cash!

The mistake most people make is merging the stock market with the current political landscape. While politics can frequently impact the short-term direction of the markets, over meaningful time periods, national politics has had almost ZERO impact on the markets. This is because the price of an individual security is really correlated with its own future prospects for profit growth versus any other factor.

Think about it. How much impact will either a Biden or Trump victory have on whether Wal-Mart is able to sell more of their products, expand their markets and increase their profits over the next few years? As you’ll see in a minute, history shows the answer is: not much. That’s because, no matter who wins and who controls Congress, people are still going to need groceries, diapers, prescriptions, household items, auto supplies, and camping equipment. That demand will most likely continue to grow no matter what.

So what is the historical record of the impact the national elections have had on stocks? Turns out, surprisingly, not much at all.

Below is a chart of the returns during every presidential term since Franklin D. Roosevelt. You will be hard pressed to see any difference between the market performance for each party. 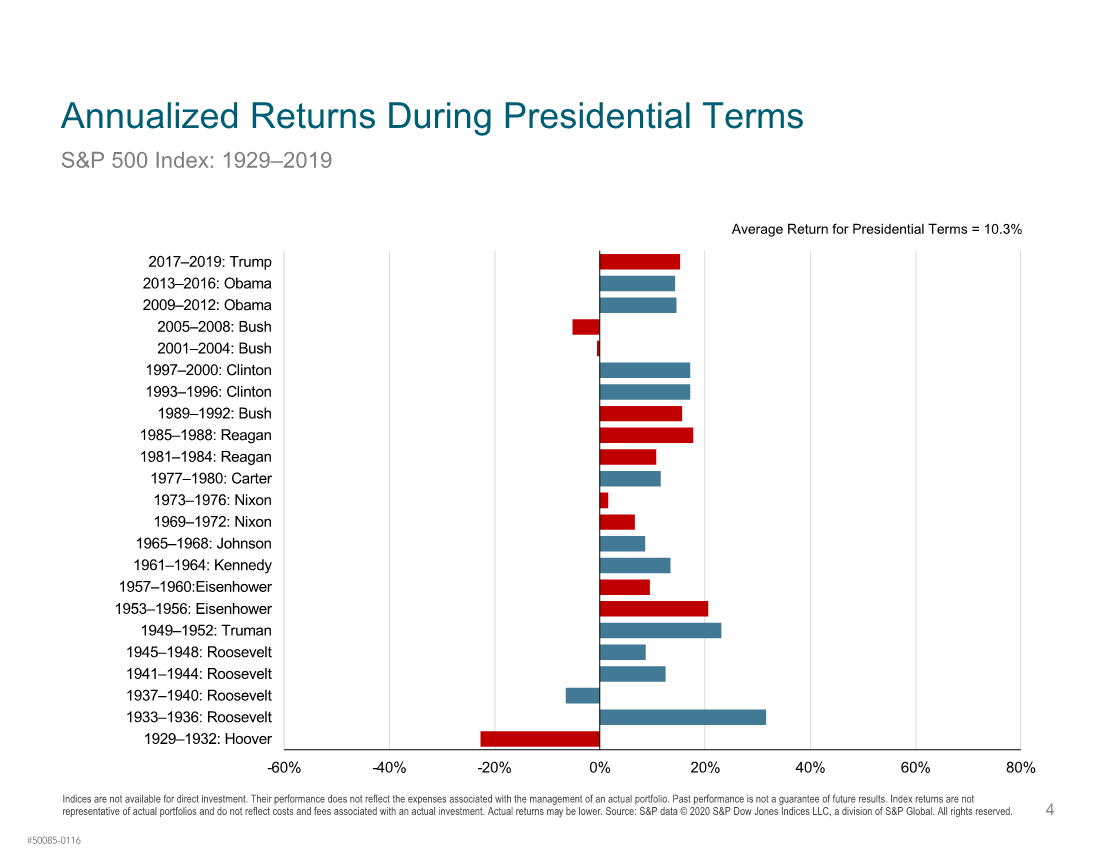 Now, here’s a chart that shows the cumulative performance of the markets through successive presidential terms. Again, you’d have to say that there is little if any difference. 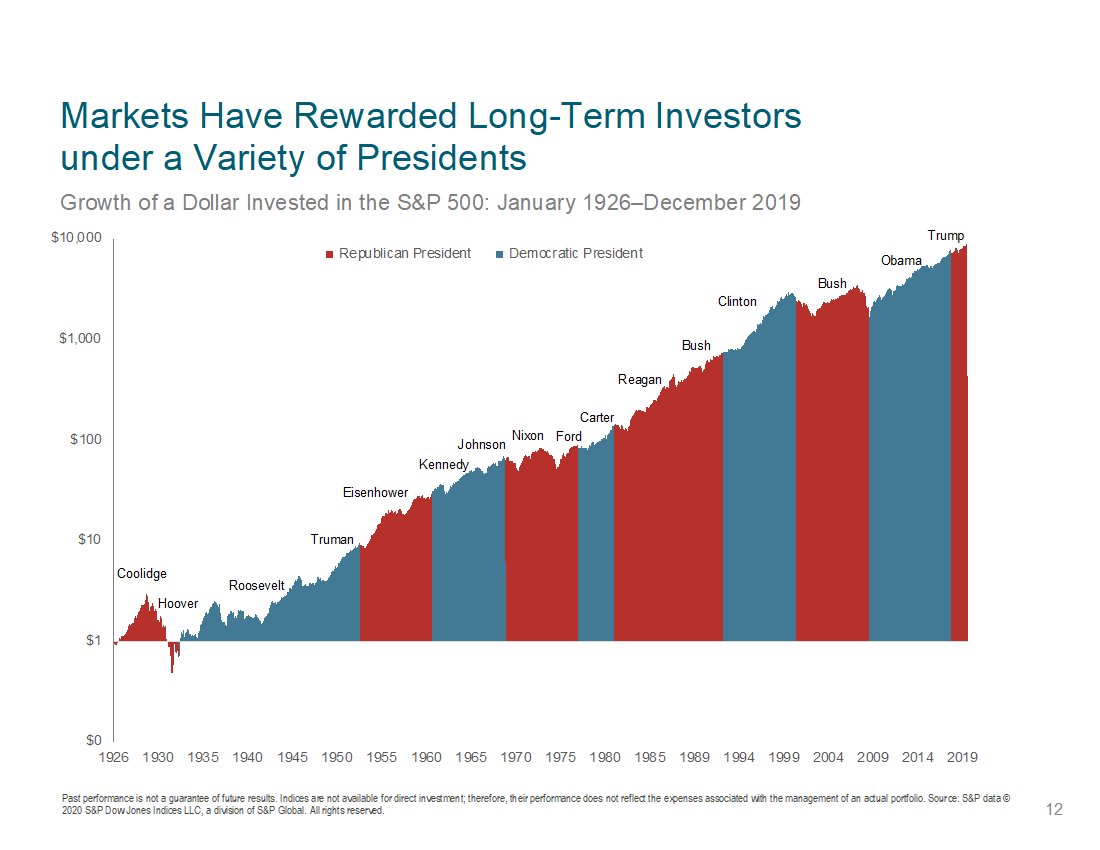 OK, you might say, but what if the Senate flips to Democratic control? As the chart below shows, it has not made any difference historically. I can imagine this might be a shocking revelation for you, but as I said at the beginning of the article, market performance is all about the ability of companies to increase their profits. Despite what we are told in the media, there is no such thing as a Trump economy or an Obama economy. American presidents are not like pilots and the economy is not like a 747. To be sure, presidents and Congress are part of the inputs that factor into market performance, but they definitely do not control it. 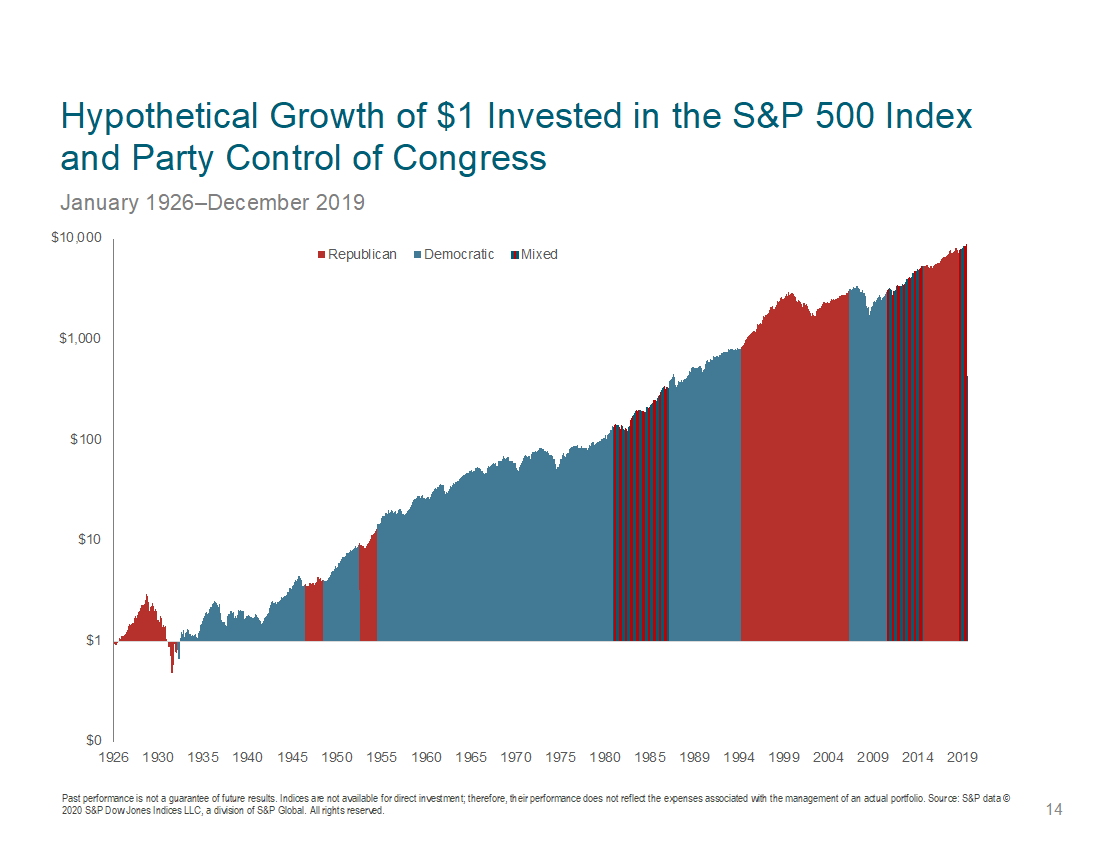 Who does control it? We do through the economic decisions we make every day. Corporate leaders respond to the demand we create by coming up with goods and services that we value enough to buy. And those who do that well are rewarded with increased profits and higher stock prices. That’s how it works. So relax and watch the electoral fireworks unfold, but don’t sweat the markets’ reaction to politics. It will all work out.