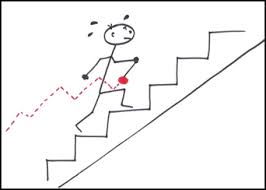 The Dow Jones Industrial Average topped 20,000 for the first time in history this week, and many are asking if this is the time to get out of the market. Buy low, sell high, right?

This is a question I have been asked ever since I first started as a financial advisor in 1985. At that time, the Dow hit 1500 for the first time ever, and the talk at all the Christmas parties that year was about the market being “too high.”  Ever since then, usually when the Dow hit a notable high water mark like 5,000, 10,000, and 15,000, the question of the market being “too high,”  and whether it made sense to get out would surface again and again.

It seems many people view an event like Dow 20,000 as some kind of a ceiling for the stock market, past which it would be impossible, or certainly foolhardy, to go.

The truth is, IT’S JUST MATH! The long-term average return for the S&P 500 Index has been in the 10-11% range. It varies slightly depending on the starting date you select. So anyone investing new money into the stock market today (or leaving existing invested money in the market) has a very reasonable expectation, based on historical averages, of earning that rate in the future as well. Whipping out my trusty financial calculator, I see that if the Dow averages 10% per year going forward, it will surpass 134,000 in 20 years, 215,000 in 25 years, and 348,000 in 30 years.

This means that someday in the not-too-distant future, people are going to be looking back just as wistfully at Dow 20,000 as we do today when thinking of the Dow 1500 of 1985. Shoulda, woulda, coulda.

Now, can the Dow drop back to some scary level in the short-term? Absolutely, and it probably will happen at some point, if history is any guide (and it’s the best guide we have). There are many risks we face today that could derail the current bull market, not least of which is our new president’s twitter posts. But the possibility of a frightening market drop doesn’t mean that we should try to do something to preclude that possibility.

The stock market has been likened to a yo-yo going up the stairs. Yes, it does go down frequently, but it’s being carried up the stairs so over time, the successive highs and lows of the yo-yo trend steadily upward, like the graphic to the right.

Anyone, at virtually any point in the past, who got frightened out of the stock market by what always turned out to be short-term downward volatility (even when violent and terrifying) wound up making a terrible mistake. Will this history repeat itself over the next 30 years?  There’s absolutely no reason to doubt it will. No more catastrophic words to someone’s personal financial wellbeing have been spoken than, “It’s different this time.” It’s actually not different, it only feels like it.

So, yes, there is exuberance in the markets today, but is it irrational?  It depends on your perspective. The United States is transitioning from a decade of monetary stimulus (low interest rates and very loose money supply vis the Federal Reserve), to fiscal stimulus provided by tax cuts and increased government spending on infrastructure. This is a big change in tactics by the federal government and it will undoubtedly have widespread impact on our economy. Most economists think the impact of these moves will be positive, although the twin possibilities of increased tariffs and trade wars loom as brakes to prevent exuberance from becoming euphoria.

The visual of the yo-yo going up the stairs is not going to be permanently changed by the Trump administration. If one can simply tolerate the volatility that the stock market delivers with great regularity, he or she can expect to be richly rewarded with outsized returns over the long term. If, however, volatility is not tolerable to you, Dow 20,000 is a great opportunity to make a permanent exit and leave the great returns the markets provide to those with a stronger stomach.